The Return of Ellie Bellie Bear : Updates all around

Two months!  Yes, I have been gone for 2 months, but that is because we have been busy.  Both a good busy and a crazy busy!

I'll start off with Ellie is doing very well. Since Bear had her airway surgery back in November for sleep apnea (lingual tonsillectomy and glossectomy), we have seen progress in various areas of development.   We believe that is because her sleep quality has improved because prior to her surgery, Ellie maintaining oxygen saturations at 80% while sleeping.  Normal is 98-100%.  This means that her brain was not getting enough oxygen, which obviously leads to several health issues.

Since her surgery, Ellie has gained nearly 2 lbs and has grown in height!  Happy dance!  Her sleep pulmologist theorized that part of Ellie's failure-to-thrive was related to her apnea.  Unfortunately, she is still quite underweight each pound is a battle - to  gain and maintain - as her GI issues also play a role.

This brings me to speech!  I kid you not, remove the lingual tonsils, de-bulk her tongue and Poof!  the child is trying to formulate more words.  This child is cursing like a sailor.  Yep, she takes after me.  I knew I should have curbed my cussing around her!

A typical Ellie conversation: (please note that the Bear does not know how to modulate her voice so it is all practically shouting)

I'd love to tell you all that I am embarrassed by her crud words, but really, I struggle not to laugh.  It is funny. She is trying so very hard and I am proud of her.  I just loudly repeat back what she is trying to say so that the people around me recognize that my kiddo is really a "polite little angle". *snort*

Well goodness, I left you all hanging with the upper endoscopy and ruling out celiacs and whatnot.  You know how you go in expecting to find something, but instead come across something different?  That is Ellie.

The gastroenterologist took 7 biopsies from Ellie's upper GI tract - esophagus, stomach, duodenum (upper portion of the small intestine).  Celiac's disease, lactose intolerance, and H. pylori were all officially ruled out.  He did, however, find marked inflammation of the esophagus and stomach.  He has no explanation for this other than perhaps it is lingering gastritis from a prior infection or maybe a side effect one of her medications.

Here's my thought - July 2014, Ellie stopped eating.  Just stopped.  She was taking in approximately 300 calories a day.  She would get a bit better and then her appetite would disappear.  In July of this past year, we started her on Periactin, which is an antihistamine that also works as an appetite stimulant.  Fun Fact: antihistamines decrease the release of histamine.  Histamine regulates the release of gastric juice.  As a result, antihistamines (such as benadryl, Periactin, Zyrtec) can help with nausea.

Anyway, my thought is that The Bear's esophageo-gastritis started back in July 2014.  That her inflammation was so bad that it hurt to eat. So, she basically stopped and then lost a lot of weight.  Nonetheless, she is on Protonix, a proton pump inhibitor, which is used to treat reflux and ulcers.  This will allow her stomach and esophagus to heal.  She has just one more month on the Protonix and then we shall see how does.  We have several GI appointments coming up with 2 different doctors as Ellie is still battling severe constipation and we have plans to do more extensive testing come June.

Semi-related to GI, for the past 5 days, Ellie has been peeing 2-3 x day.  This is a marked improvement over her peeing every 24 hours.  Like her urologist, I do believe the constipation does contribute to the urinary retention.  Yet, I do wonder if some of her medications also play a role.  Nonetheless, I am hoping that we can start working on potty training soon because it is time to say good-bye to pull-ups! 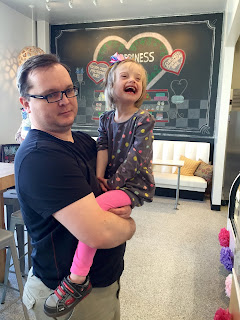 Back to sleep - yeah, I know.  I already waxed and waned about the sleep.  Sleep is so important and if Ellie isn't sleeping, no one is sleeping!  Bear decided to return to her old habits of early awakenings for most of late December into February. This was the whole waking up at 2:00am and partying until 7pm that night.  Do you know what sleep deprivation does to a child?  It is like ADHD on steroids.  It is as though I never gave her the Adderall.  She is wild, impulsive, inattentive, and irritable!  There were several phone calls to the sleep pulmonologist and a visit in there as well.  We finally seem to have a handle on her sleep, which has made a world of difference.

Spring Break was a grand ole merry party.  First up, Ellie had a repeat sleep study.  Because we know how to have a great time on spring break!  Her sleep pulmonologist and airway ENT want to see how things are going after her surgery.  Ellie was a rockstar! Oh yes, she fought us tooth and nail with each electrode being placed, but she was able to calm herself down in between.  She also SLEPT!  We do not have the results yet, but I am feeling pretty positive.  Yikes!  I hope that I didn't just jinx everything!

Aside from all these fun medical things going on, Ellie has been enjoying her weekly horse therapy sessions.  She is getting better at guiding her horse using the reigns and saying words.  She had a dance recital last month and actually danced.  She did not run off stage.  She did not try to crowd surf.  She did not try to break dance like last year!  Ellie went with her kindergarten class to the children's museum and did great - meaning she didn't run away from her aides and she played nicely with her classmates.  All in all, even with all of the medical issues that the Bear is experiencing, she is thriving and happy!