The Beginning
When Ellie was 22 months old, we saw a developmental pediatrician.  In the room during testing, barely walking, she shoved the exam table across the room, hoisted herself with just her arms onto the table and then rushing down, and mouthed a developmental tool so much that we couldn’t get it out of her mouth to even test her.

At home, she had the continual mouthing making it difficult for her to play with toys, eat, and even use writing implements.  Her hyperactivity looked like excessive, dangerous, non-purposeful climbing.  She would have this glassy look in her eyes.  Then there was the usual impulsivity and distractability.

Things were so bad that I had to hold her while on the phone, and bring her into the bathroom with me where she would hang from the shower curtain or climb into the sink with the water on.  I was in tears with the developmental pediatrician.  Something had to be done. Thus began Ellie’s journey for managing
ADHD.

We started off with ABA (applied behavior analysis) therapy, which is often used in Autism, but occasionally in ADHD.  We added in short-acting guanfacine AKA Tenex (a nonstimulant medication).  With the addition of Tenex, the hyperactivity significantly decreased, but she still had the other behaviors.  She was 3 years-old at the time.

Starting Stimulants - A Light Switch
By 4 years-old, it was obvious that the mouthing, impulsivity, and distractability were severely impairing her daily activities and learning.  It was recommended that we try a stimulant medication.  I opted to wait. . . until she was 4.5 years old.  I regret waiting.  She started Adderall after a trial of Ritalin that did not work well.  It took 3 doses changes before we saw anything.  I kid you not, it was like a light switch went off.  She could focus, she could sit, she could finally experience the joys of playing in a sandbox or coloring.

Medication Roulette
As always, good things come to an end.  By 7 years -old, she was maxed out on the Adderall so we added in Risperdal.  This worked well and she finally, after 3 years of not growing, she started to gain weight. .  . a lot of weight and rapidly.  Seven pounds in 6 weeks and she slowly continued to gain over the year.

Of course, 9 months later, the Adderall completely stopped working so stopped it and we added in 10mg of Vyvanse while continuing the Risperdal. It worked!

And. . . More Weight Gain
Unfortunately, 6 weeks ago, Ellie started to experience worsening reflux with vomiting.  The doctor added in Cyproheptadine to increase gastric emptying.  This medication was her old appetite stimulant.  You can see where I am going with this.

Ellie started eating a huge breakfast, 2 lunches at school (she would eat her entire lunch at snack time and then have to buy lunch at lunch time) and would eat from 4pm-6pm.  Which, led to more rapid weight gain.  I felt the need to do something.  As she had gained over 14 lbs in 1 year.

Time to Stop the Risperdal
Yes, the Risperdal work for her behaviors when paired with a stimulant medication, but my thought was we could knock out this mediation and increase the Vyvanse since she was tolerating the 10 mg. Thus, we began a month-long weaning program.  Let’s just say her ADHD was unbearable.  Hitting, hyperactive, oppositional, impulsive with throwing, distracted to the extent that it would take 7 minutes just to get her shoes on (remember the movie “UP” with the dog and “squeril”? - yes, like that). Add in the tantrums due to being unable to regulate herself and also poor communication skills, well, it was tough - especially when she got kicked out of her special needs dance class last week and she couldn’t understand why.

An Undesirable Effect from Vyvanse Increase
Last week, her Vyvanse was increased to 20 mg.  We saw some face rubbing and thought it was allergies.  We also saw some jaw popping, but we thought she was doing it on purpose for sensory reasons.  We were wrong.

On Tuesday, her Vyvanse was upped to 30 mg.  We did it Tuesday as it was a snow/ice day and I could monitor her.  Nothing of great excitement occurred.

Then Wednesday, after arriving at school, I get the call and a video.  Ellie had uncontrolled movements and tics.  Face rubbing, crossing eyes, head shaking, jaw movements, fingers twitching, arm waving, feet shaking and tapping.  At home, it was so bad that she was practically falling off the toilet and she couldn’t even get food to her mouth.

How do you treat it?  Well, you don’t.  You have to wait for it to get out of the system.  Vyvanse’s half life is 10-12 hours, meaning that a fair amount of it should be out of her system, but it can take a few days for it to be completely out.  At 13.5 hours, it was just as bad and it was also time for her bedtime Clonidine.  Clonidine is sometimes used to decrease tics in those who have Tourette’s syndrome.  Once it kicked in, it decreased her movements by 50% and she was able to sleep.  This morning, they are much better, but she still has the movements.  Neurology says it may be another 1-2 days before it is completely out of her system.

Where Do We Go From Here?
I am not sure.  There are several other medications out there.  She tolerated Adderall so well that perhaps the long-acting, extended release will work. We could put her back on Risperdal, but she would still need something else with it.  I am nervous and stressed.  I don’t want her to endure trial and error of a bunch of meds.  I don’t want to go through several weeks of finding the right med, the right dose, and with minimal side effects.  My heart hurts for her.

One of the things that we really work on is fostering Ellie’s independence.  This is why she’s been doing trash duty, laundry, dishwasher duty, and feeding the pets for a few years.  Her “folding” leaves much to be desired! She is really into being like Daddy and Mama so she loves to dust mop the wood floor.  Now if only I can get her to do bathrooms!  We are still working on dressing independently, but she did learn how to put on her coat by herself and she is so proud of herself! 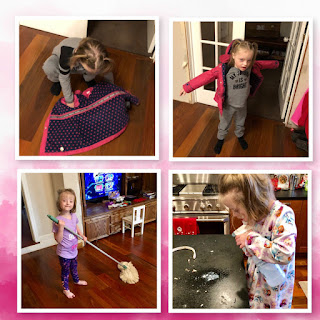 Now potty training, that is another story.  Although, I do find it entertaining that she is enamoured with public restrooms.  She tells us 3 x at Noble Sandwich Company she has to go — all because they have black toilets.

At this point, we are teaching her how to manage her medical care.  She helps me make her enema in the kitchen, gets her wound care supplies, and helps with her abdominal binder.  She recently started a daily inhaler for asthma (more on that later) and it learning to do it herself. 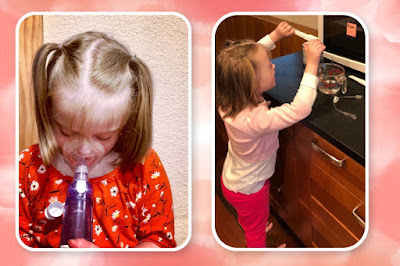 Apparently, the pie was so good that she had to dive in face first.  When we told her to use her fork . . . well, she did. 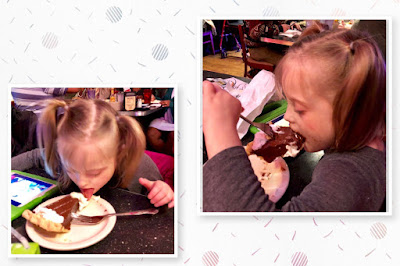 Bear Bear is really trying to talk.  There are sentences, but we don’t understand them.  She made up another a sign and was saying something, but we just didn’t get it.  It wasn’t on her speech device.  The frustration and tantrums were epic.

We finally figured it out when this past week I caught her packing her lunch, loading up her daycare backpack, and putting on her shoes.  Kidspa.  She wanted to go to Kidspa, the drop in daycare aka “play school”.

Unfortunately, it was New Year’s Day so they were closed.  We told her tomorrow. She wasn’t getting it.  We showed her the calendar and really tried to help her understand.  Finally, we told her first she will go to bed and then in the morning she would go to kidspa.  So here it was 2pm on and I see her grab her blanket, turn on her oxygen, turn off the light, and climb into bed. Five minutes later, she comes out and gives me this exaggerated fake yawn and again gets her backpack and shoes. 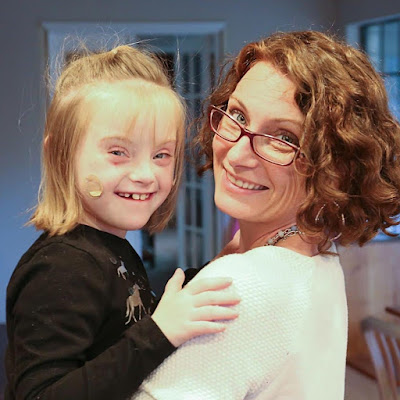 Ellie has definitely taken to using her Chat device.

I see how I rank. 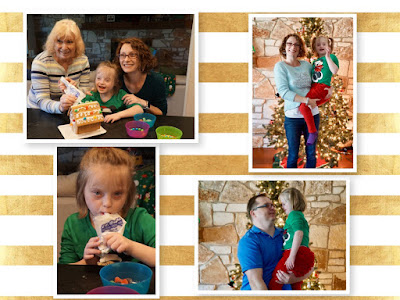 Earlier in December, my parents and brother came down for a visit.  We crammed so much in.  Seeing Santa, riding the train at the mall, decorating the tree and decorating a gingerbread house as well as having a family holiday meal at Threadgills [southern cooking and live music, the armadillo world headquarters, where Janis Joplin got her start].  On Christmas Day, we celebrated my friend’s in-laws’ house which is becoming a lovely tradition.