Things have been quite stressful and chaotic over here to the point where I feel exhausted and really need break.  To see my child struggling and not being able to help her is devastating.  I am begging you readers for any advice that you can give me - you can respond in the comments section.

I know that mental illness is something that is not often discussed and that there is a major stigma, especially when it comes to mood disorders.  I write about these issues so that people can become more aware and so they may feel like they are not the only parents out there caring for a child with mental illness.  We all need to support other as it is so easy to feel alone.

Out of all the random medical issues that Ellie has, the psychiatric stuff is the worst and most stressful.  Being developmentally delayed and mostly nonverbal makes it difficult to know what is going on in that head of hers.  A while back she was diagnosed with a "mood disorder related to general medical condition", but let's just call it what it really is - bipolar disorder.  After an extensive google search for Down syndrome and bipolar, all I found was that there is a significant decreased incidence of mood disorders within the Down syndrome population.  Yippee! There is a strong history of bipolar in my family so there was always the chance that she would have an Axis 1 disorder (depression, anxiety, mood d/o).  To be truthful, I feel like the significant adverse reaction to Vyvanse turned on the gene and triggered this brain change in her.  Add in the fact that both the  neurologist and psychiatrist have determined Ellie's case to be "complex" as she has atypical responses to the typical medications used to treat ADHD and bipolar disorder and an odd way of metabolizing medications.  I mean, of course she is complex.  That is her thing.

For the past two weeks, Ellie has been extremely emotional in the mornings.  She may wake up crying and trying to lock herself in her room (a bit of humor: the lock on her door is on the outside so that she can't lock herself in. However, she thinks by pushing in the button before shutting the door that we can't get in) or in the bathroom.  There doesn't appear to be any trigger.

After her morning medications of Adderall (ADHD stimulant) and Trileptal (mood stabilizer), her mood is more stable and her ADHD is well under control.  She takes a lower dose of Adderall late morning, but I do not believe it is a high enough dose as her hyperactivity and impulse behaviors comes back full force.

Immediately upon getting off the bus in the afternoon, it is like a switch has flipped.  She is extremely hyper, impulsive, oppositional and agitated.  For the past few weeks, if I tell her "no" she screams, cries, and kicks me.  Occasionally, she shoves my face away and has caused me neck pain from the force.  Afternoons and evenings are the worst for her aggression, defiant behaviors, and anger, but then after getting her bedtime dose of Trileptal, she seems to do okay for the bedtime routine. 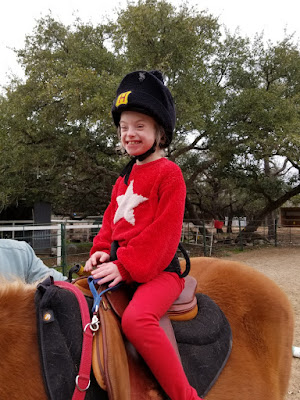 On Wednesday evening, I saw something that I have not seen before - self harming behaviors.  We were at horse therapy and we told her that she couldn't use a certain horse saddle.  She started to scream and cry while using her fists to hit her head and face and then bit her hand.  Afterwards, she wanted a strong hug from me while crying.  This is not normal behavior for her, even with her psychiatric issues.  This scared me because she could have really hurt herself.

I have been in near daily contact with the neuropsychologist this week and we determined that she is having trouble regulating her moods and emotions (think a mixed state of both mania and depression) and then she is having rebound ADHD after the stimulants wear off.  Med changes are tricky.  We can only change one medication at a time and I have to do them on a weekend so that I can observe for side effects.  We had to change her blood pressure medication so the psych med adjustments had to be delayed.  We have discussed a few options and we now have a plan in place.  I am hopeful that we will eventually find something that will help her, but I am worried about how long it may take.

My heart breaks for her and I am asking for prayers, positive vibes, and good thoughts so that we may get through this.  I can have my Ellie Bear back.