Say What?! - Pediatric Hirsutism and Stress!


Hi y'all!  Can you all feel the stress radiating from me and hear my screams from Texas?  Just when my stress and anxiety levels start to taper down, something happens to send them skyrocketing again.  Seriously, can this kiddo have anything else?  It is like Ellie is the poster child for random, non major (thank goodness!) medical conditions that always leave health care providers stumped.  Why?!

*Please note that aside from Ellie's low thyroid, these medical conditions discussed in this blog are not related to Down syndrome.*

Yesterday was Ellie's neuropsychology appointment (more on that in a later post).  I brought to the nurse practitioner's attention abnormal hair growth - something that started a few months ago.  My thought was that it may be her Trileptal (mood stabilizer/antiseizure medication).  Yes, it isn't listed as a side effect, but. . . "it's Ellie".  This led to the other neuropsychologist evaluating her and saying it's odd followed by the Comprehensive Care doctor also saying it's odd.  All said - "I am not sure what the cause is.  This is atypical.  Perhaps it is the Trileptal, but that makes no sense.  However, this is Ellie".

Abnormal hair growth or hirsutism is not often seen in kids.  For Ellie, she has increased and darkening hair along her arms and legs as well as fine hair, also darkening along her spine. Some people refer to it as lanugo.  The Princess refused to cooperate for a picture so check out the one from a Dermatology journal below.  Often times, the hirsutism also occurs on the face along upper lip and occasionally the chin and side burn area.  Thankfully, we are not seeing that . . . yet. . . hopefully never.  The anxiety over facial hair makes me want to puke.  I don't want to shave my 9 year-old's face!  I don't know if it is transient and will eventually fall out or if it will be permanent.  Cue: Mama Bear crying, screaming, and having a heart rate of 180.

Hirsutism is most common among woman who have polycystic ovarian disease.  Ellie is too young for that and there is no family history.  Four, yes, I said FOUR, healthcare providers (including endocrine from a few months ago) and myself have concluded she is not in puberty.  Plus, the distribution of hair would be more along the lines of the usual puberty patterns - think legs, underarms, and genital region.

Other causes include long-term use of steroids such as prednisone and Cushing's Syndrome.  All of these increase one's cortisol levels.  Cushing's Disease, which can develop suddenly, is rare in children and is often the result of an adrenal gland, which sits above the kidneys, tumor which also causes increased cortisol levels.

Testing for Cushing's Disease is a pain in the butt and not all that accurate.  One test involves analyzing cortisol levels via blood draw in the morning and at midnight.  Oh yes, midnight.  What lab is open at midnight?  A 24 hour urine collection.  Yep, you read that right - you are basically going to deliver a gallon of pee to the lab.  Also a dexamethasone-suppression test, which I don't completely understand. 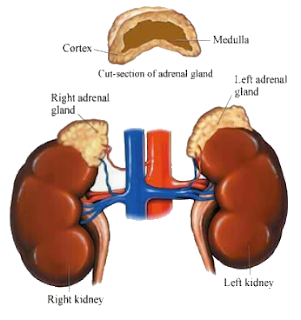 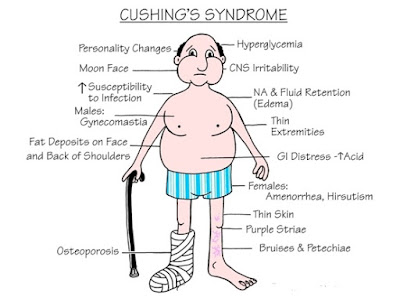 All of us have concluded that Cushing's Disease is very unlikely since her only signs are the hair growth and the high blood pressure.  The high blood pressure is also atypical in that it is in her left arm only and she has high renin levels (produced in kidney).  Ellie has her follow up with the nephrologist this afternoon so I plan to talk to him about it.

As it stands, the Comprehensive Care doctor is going to do an extensive literature review as well as consult with endocrine.  I for one would Like to have for harmonium levels drawn especially testosterone.

Not-So-Fun Fact: hair along the spine is is slightly more common in Down syndrome than in the general population, BUT not even close to people Ellie's age.

I hope to get in a blog post soon on Ellie's strabismus surgery from the end of January as well as a psych update.  In other news, I managed to re-pinch a nerve in my neck which is causing left-side neck, head, should, and the upper back of the arm pain.  It isn't intolerable, but the headaches and shoulder get pretty bad and I can barely turn my neck to the left.  So, hello PT twice a week because I totally have all the time in the world for that.

Thank you everyone who offered up prayers, good vibes, positive thoughts, etc after my last blog post.  I would very much appreciate if you would continue to think of Ellie Bear.

Ellie Bear Fashion Through the Years

I think it is time for us to do a fun post!  I was going through some photos the other day and came across several where Ellie was wearing various outfits as a way of expressing herself.  For people who have been following the blog for a while, do you remember the multi-headband stage?

Her latest, which I do not have a picture of, is wearing a medical mask.  I had to explain that one to school.  Her bus aide has been wearing a mask as means to prevent catching the flu.  Of course, the Bear thinks it is a fashion statement.

I wish I had a picture of the time where she wore a nightgown, leg warmers on her arms, and fireman rain boots. . . to Top Notch. 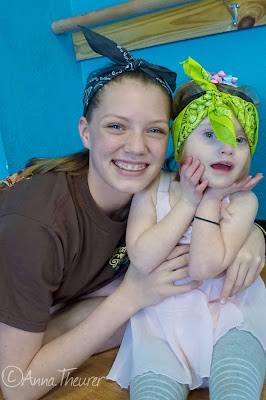 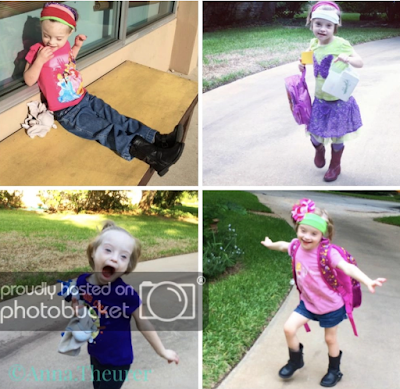 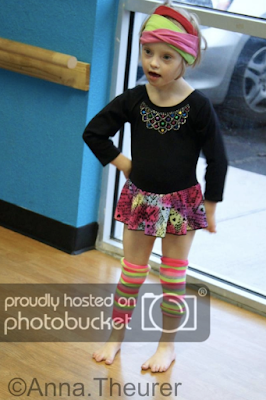 How sassy does she look with her hand on her hip? 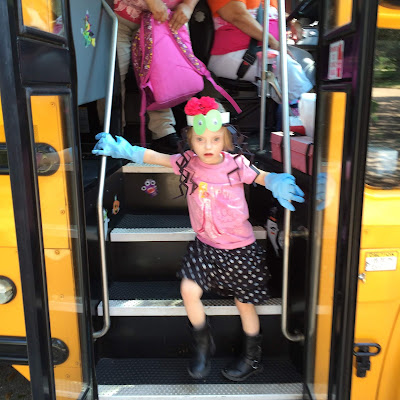 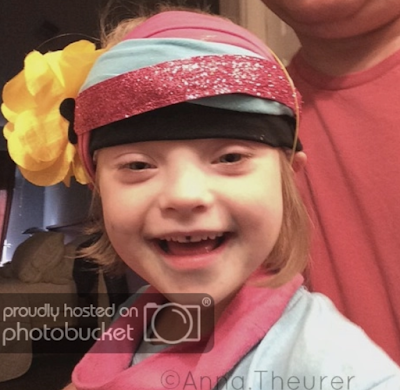 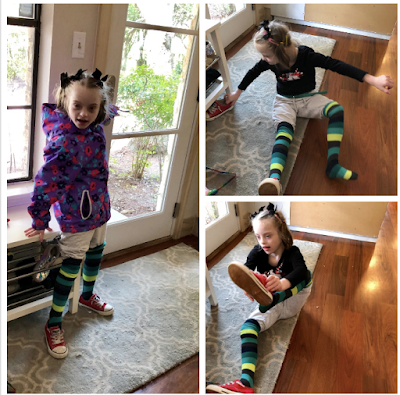 Not pictured - when she pulled leg warmers over my socks 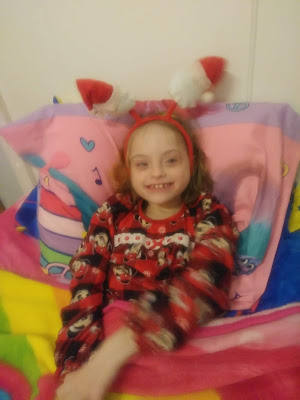 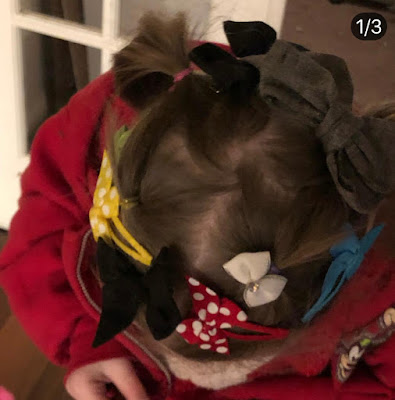 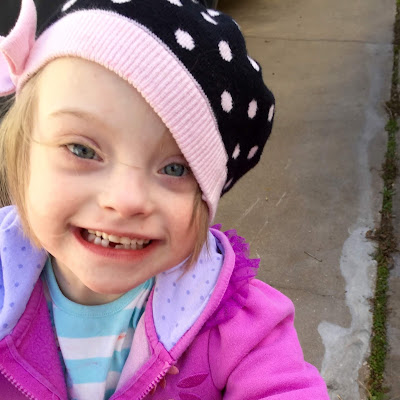 She went through a hat phase 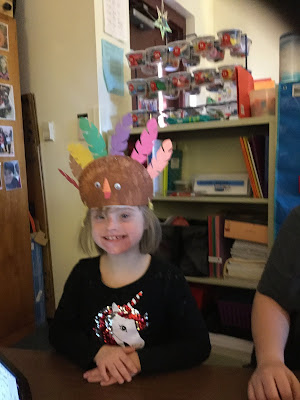 May you all have a wonderful, safe, healthy, and relaxing Holiday season full of laughter, love, and copious amounts of coffee!