Since we pulled Ellie out of school on 12/3 for her surgery preparation, she has regressed in both potty training and in social skills.  She missed most of December due to her surgery and winter break.  I believe that this has contributed to her regression as well as:

Surgical recovery with pain
The wound from the adhesive tape - also pain
The 2nd stage of surgery on 1/20 - more pain
The subsequent infection at her cecostomy site - again, pain

All of these things have affected every aspect of her life and I think her pain and frustration were being taken out on the other kids. 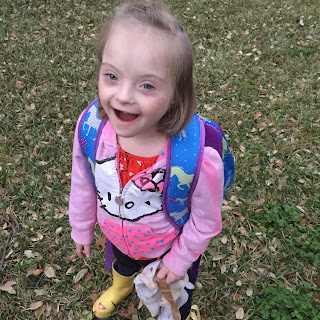 First off, potty training.  We have struggled for years with potty training due to her urinary retention.  Before surgery, I would take her every hour.  She would strain, but pee on the toilet.  She was having around 1 accident a day and we had her in underwear at home and at school.

Anesthesia causes acute urinary retention and because of this, she needed to be catheterized 4 times while in the hospital recovering.  I usually request that the OR nurse cath Ellie before they pull her anesthesia and this usually helps.  It did not this time.

Now, Ellie is having multiple accidents a day.  I still take her every hour.  She strains and pees a little bit, but 20 minutes later, her diaper is saturated.  It is as though she is not completely emptying her bladder.  I am no longer sending her to school in her underwear.  I am wondering if this is still the effect of anesthesia?  If it somehow changed her urinary retention?  We see urology in 3 weeks and I hoping that the doc can give me some insight. 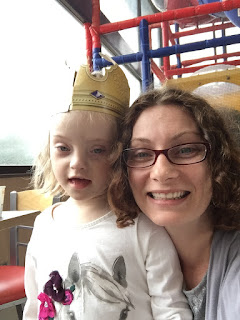 This is our biggest issues and it is affecting everything.  Her ability to make friends and her ability to learn academically.  We noticed just before her surgery that Ellie was having trouble concentrating.  She was tearing stuff off the walls at school, not sitting, and requiring lots of redirection.  We added a new ADHD medication (the one that caused her to gain 7 lbs in 6 weeks) and it helped once we got the right dosage.  Unfortunately, it did not help with her social behaviors.  For the past 2 years, every once in a while we would have incidents where she would grab other kids' shirts or tackle hug them.  It would seem like there was no trigger.  She would be playing nicely and then suddenly grab.  Obviously this doesn't help build friendships.

Post surgery, it is occurring multiple times a day at school, in the therapy waiting room, at dance, and at restaurants with playscapes.  She is pulling shirts, one time pulled hair, and clearing stuff of other kids' desks.  We believe some of this is her lack of communication.  She cannot say " I want to play with you" or "I like your hair/shirt." We also see it more if it is especially crowded and loud.  Some of it is her trying to get out of work and some may be attention seeking.

Unfortunately, the teacher is recommending that we move her to a different setting next year.  Right now she in FAC, which is the functional academic classroom.  This class focuses more on academic goals and there is more inclusion.  He wants to move her to FCC, which is the functional communication classroom.  The focus is more on communication, has a smaller class size, more aides, and less inclusion.  His hope is that one year in FCC will be enough and she can return to FAC.  I am conflicted and stressed. On one hand, I know that this is probably a good move for her. She can't focus on academics when she is acting out this much. On the other hand, I am wondering, did I fail her or did the school? 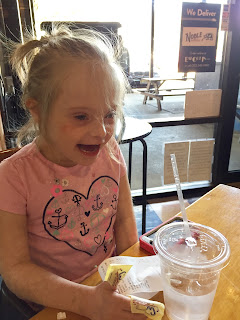 We are currently trying to get her into an ABA social skills group, but we are running into several obstacles.  The places either have long waiting lists or require her to be autistic.  One place would only take her if we agreed to 35-40 hours a week.  Like we could afford that.  We have one place that says they have space, but they will not call me to tell me the day and time of the week or when she can start.  I don't understand why it has to be such a battle.

I have requested a functional behavior assessment at school.  After this assessment, we will develop a Behavioral Intervention Plan [BIP].  Right now, we are addressing her behaviors the same way her teachers does so that we are consistent in and outside of school.  I would love to tell you that it is preventing these behaviors, but I would be lying.  I am at the end of my rope and feeling pretty helpless.

The Chunky Chicken is back!  Ellie's ADHD has been out of control.  She won't sit in her chair, is shoving things off kids' desks at school, and tearing pictures off the walls.  At home, she gets distracted putting on her shoes.  One shoe half on and "oh my goodness, I must go over there!".  She does great in the mornings, but in the afternoon, it is as though we never gave her the afternoon adderall.  Unfortunately, she has maxed out of the Adderall dosage-wise.  As in we cannot go up on the dose.  So we started a new, non stimulant medication.  The main side effects are fatigue (She is going to be at 6:30pm now!) and weight gain.  The weight gain is excessive.  She is gaining 1 lb a week and eating nonstop.  Sadly, the GI doc warned us that if she gains too much more, she may need to go on a diet.  Honestly, I think that she has already gained too much weight.  Yes, she had failure to thrive and needed to gain weight, but this is excessive and piling on too quickly.  It is unfortunate, because I feel like this new medication is working.  Yet, I have to weigh things - ADHD out of control or weight gain with the associate diabetes and high cholesterol. 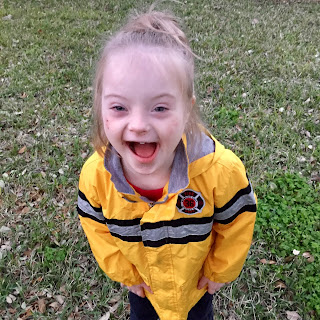 In other news, where I last left off, Ellie hadn't had a bowel movement in 19 days.  GI wasn't coming up with a good solution or taking me seriously.  Well, after 21 days, they had us come in for an office visit.  The new plan was to give a SMOG enema through the cecostomy tube.  Usually, we put in normal saline.  A SMOG enema is saline, mineral oil, and glycerin.  These are the types of enemas we used to give Ellie rectally.  That night, I was supposed to give 180 mL of a SMOG enema followed by 180 mL of saline.  Well, I only got in 30 mL of the SMOG enema before the tube clogged.  Did all the oil and glycerin clog the tube or was there a big ole piece of stool blocking the tube?  I waited a while and was able to get some saline in.  I called GI in full on panic mode and asked if I could mix the 180 mL of saline with the 180 mL of the SMOG enema to make it less viscous and it worked!  I was able to get all of it in and we got results! 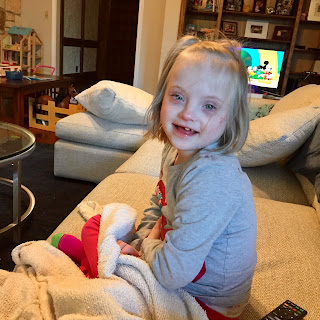 The following day Ellie had her Chait Trapdoor placed.  This is the permanent button in her colon.  It was a quick day surgery and she recovered nicely.  They used guided x-rays to place the Chait Trapdoor and we discovered that after 22 days, her colon was cleaned out!  The post-op nurse spent a great deal of time going over what to do if the button comes out.  Apparently, this is a common thing.  Yet, if you see what the Chait Trapdoor looks like, you'd think it would hurt if pulled on.


We are now doing every other day saline enemas and they seem to be working (I don't want to jinx this so I am knocking on wood right now).  Even though it has been nearly 2 weeks since the button was place, Ellie is still having a lot of pain when I open/shut the trapdoor and when I attach the adapter device.  I called Radiology to see if this amount of pain is normal this far out, but of course I never heard back. 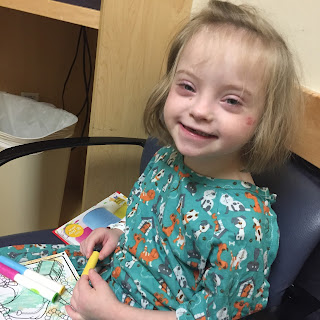