Surviving the Storm and a Speech Explosion

I want to thank everyone for the support that I received with my last post.  It is hard to be so open and honest, but I have learned that many people have felt the same way and many people have reached out to me offering support.  When I write these posts, it is for 2 purposes - to help me process my thoughts and to also let other people know that they are not alone.  Since the post, I have had actual adult conversations that were not with my husband, mom, or doctors.  So wooohooo!

We are surviving over here.  School has started and Turkey Bear managed to miss the first day.  Because of her psych issues, she lost it at cardiology on August 1st.  The EKG was a catastrophe so we had to give up.  The echo.  Well she was really excited about the echo - just hopped right up on the table and yanked her gown open.  I kept showing her pictures of her doing the renal ultrasound and said it is like that, but on her heart.  She would say “yeah yeah” and point to her heart.  Yeah . . . so when the tech put the wand on her chest, she got angry.  Kicking.  Screaming.  Yanking the wand to her abdomen because the tech was “doing it wrong”.  My little juvenile delinquent’s behavior led to ordering the echo and a CT scan angiogram (a fancy way of saying looking at blood vessels via CT scan) under sedation.  Of course the only day they could do it was the first day of school.  She’s totally starting off the school year on the right foot.

Why we are seeing Cardiology . . . again.

I believe it was her 18th or 19th time under sedation/anesthesia and sadly they remember us.  Although, mainly because I stand there and say things like “she’ll need and I&O cath due to urinary retention” and  “could you give her that propofol again before you pull her out of anesthesia because she has emergence delirum?” as I hand them a word document detailing medications, dosages, why on them, and who prescribes them.  Apparently, most parents don’t do that? very combative afterwards.  She has no qualms about ripping her IV out with her teeth (yes, through the tape) while kicking me from her bed with nearly enough form to knock me over.  Procedure and surgery days are so much fun!

Ellie’s heart is structurally normal.  We were looking at her aorta to see if it was narrowed and that was the cause of her high blood pressure [BP] in her left arm.  It isn’t because her aorta is normal!  Her left ventricle (the left lower chamber of her heart) has normal thickness.  With high BP, the heart has to work very hard to pump and the left ventricular wall gets thick.  She does not have this! Ellie does have a right aberrant subclavian artery that is looping around the back of her esophagus causing some narrowing.  The cardiologist says she will not move the artery unless she has lots of choking on solid food episodes and that has only happened a few times where she had to make herself throw up.  Anyway, we still don’t know what is causing her high BP.


Of course this means we get to go to nephrology every 2 weeks until we get her BP normal.  She is one Norvasc since the clonidine caused aggression and we have since gone up on the dose.  It seems to be working.  At her well check, we will do blood work that looks at kidney function.  I am pretty sure The Bear is fine from a kidney stand point.  Who wants to bet that we will never find the reason for her high BP?  Those who say we will get to watch Ellie for an entire week while I run off to a deserted island.

Now in other, fun exciting news, Ellie Bear is really trying to talk.


When I first heard her say “bye y’all”, we were leaving the drop in day care and I had no idea what she was saying.  It wasn’t until I put her in the booster seat that I figured it out.  The little turkey is a true Texan.

I like to think that sometimes it’s ok to have a pity party. To have it out and then take those deep breathes and dust yourself off. Sometimes the pity party lasts an hour, other times a week.  Sometime things suck for a while and you appear to handle it with grace and suddenly, it all comes crashing down at the most inopportune time. I mean, hey, it is totally normal to start crying in the workout section in the middle of Kohls (I’m thinking it would have gone better in the purse section, but oh well).

I am guessing you have by now figured out that I had a pity party in the middle of store and at home and in the car that lasted intermittently for a few days.  It was all an accumulation of things and then the fact that Ellie got 4 diagnoses and 4 new medications all within the span of the week.  I don’t know why the diagnoses bother me.  It is just a label for all the crap that she has been going through for a while now.  Anyway . . . 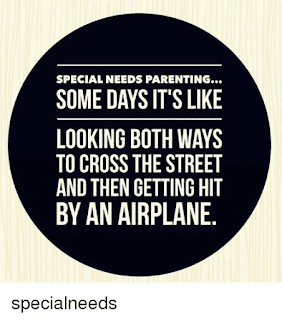 Ellie is almost 9 years-old.  Her speech is lagging way behind - at that of a 22 month-old according to her most recent speech evaluation. She has come a long way since getting her communication device (more on that in a future post), but at times, I am sad.  I want to have a conversation with her.  Hell, I can have conversations with 2 year-olds.  I want to ask Ellie what she did at school today with her not just sign “school” - essentially repeating the last word I say.  Yes, she is really starting to understand things and I am seeing a cognitive explosion, but I want to be able to do things like have tea parties at restaurants.  To have a conversation.  To have her fully potty trained (she is almost there!) and not pooping in her pull up.  I want to snuggle up on the couch and watch an actual movie with her.  Seriously, I still haven’t seen Brave or Moana or Trolls.

On top of that, Ellie’s behaviors are out of control.  For months, we haven’t found anything that worked.  The morning of her neuropsych appt was bad.  I internally screamed “I CAN’T do this anymore!  I am done!”  This of course led to more tears. 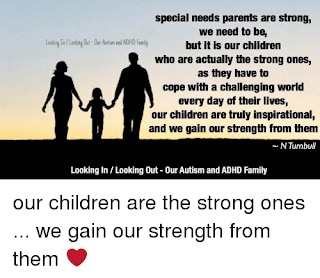 Ellie has Down syndrome and that is nothing exciting.  She has multiple medical issues.  Also nothing of great excitement.  What is something.  What makes it most difficult to get by day by day is her behavior, her mood swings, her defiance.

I always knew that she’d end up with an Axis 1 psychiatric disorder given our family history.  I just thought it was years down the road. She definitely has ADHD.  Her case is text book. She’s had it since she was 2 years-old.  We found the miracle drug of Adderall when she was 4.5 years-old.  A light switch went off.  All good things come to an end though.  She was maxed out of Adderall.  Thus began the search for new meds - for months!  We are still searching.  Medications she used to be on either didn’t work (i.e. after 2 months of stopping Risperdal and then restarting it - we saw no change in hyperactivity anymore) or they caused adverse effects (tics, uncontrolled body movements, mood swings, aggression).

I mean it is totally normal to have a Kleenex box flying by your head while in an exam room waiting for the psychiatrist because I wouldn’t give her a tongue blade.

This summer I thought we would get her regulated.  I had discussed with neuro that I was seeing signs of bipolar in addition to her ADHD and thus transferred her care to a neuropsychiatrist.  We’ve been seeing her every 6 weeks and we discovered a few things.

Ellie was on short-acting guanfacine (Tenex) for 3 years.  It is a blood pressure medication that works in the brain.  It worked great for hyperactivity.  WORKED as in past tense being the operative word.  This time, it caused massive mood swings.  Changing from minutes to minutes. Going from extremely hyperactive and singing to yelling, agitation, and hitting herself because I didn’t make her sandwich fast enough.  This is not a normal reaction.  After 3 days, I stopped it.

Ellie takes 0.2 mcg of clonidine at night for sleep.  This is another blood pressure medicine that works in the brain. It is also used for hyperactivity.  Nephrology and Neuropsych wanted to do a low dose (0.05 mcg) of clonidine in the morning for both her high BP and ADHD.  It was disastrous.  For the first 3 hours, she was very aggressive - biting, kicking, shoving my face hard, hitting herself.  Then at the peak, she would be a calm angel.  So yes, the clonidine was working once it reached peak, but we couldn’t release her in the world with her violent behaviors.

The Moody Child:
We started Ellie on Strattera for ADHD in May.  We noticed it helped with her focus.  We bumped up the dose in June, less focus but still better than without it.  I finally realized that her moodiness was caused by Strattera.  Interesting thing about this medication.  It works on norepinephrine.  Most antidepressants work with serotonin or norepinephrine - both neurotransmitters in the brain.  In people with bipolar or other mood disorders, a medication like Strattera or Zoloft without a mood stabilizer trigger the mood swings. Finally, Ellie now has the diagnoses of Neuro-developmental disorder and mood disorder with general medical condition (basically a mood disorder, but not a specified on like bipolar or borderline, etc).  We have started her on Trileptal which an anti-seizure medication that also doubles as a mood stabilizer.  Fingers crossed that this medication helps her without many adverse effects.

Superwoman Is A Fictional Character:

There are days where I say “I am done.  I can’t do this anymore.” and those days have lately seems to occur more frequently.  The thing is, we all know that I am not done.  It is what it is.  Ellie and I will face this together.  I am her mother.  Her caregiver and I will never give up on my child.  Ellie is my everything and I would do anything for her.  So no, I am not done and I will move forward as I always have for the past ~9 years.  This does not make me make me superwoman.  This makes me a mother who loves her child and you would be doing the same too.