While several children with Down syndrome are more likely to have some constipation due to their low muscle tone, Ellie's extreme gastroinstestinal issues are not related to her sporting an extra 21st chromosome. 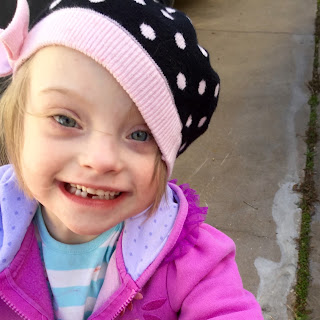 Ellie has something called moderate - severe delayed colonic transit.  Something that was confirmed last year via Sitzmaker study.  What this means is that the stool moves very very slowly through her small and large intestines.  Due to the sluggish nature, this allows for more and more water to be pulled out of the stool and reabsorbed into the intestinal walls.  What this means is her poop becomes hard a rock moves even slower.  This is something that cannot be measured by dietary measures along such a increased fiber, prune juice, increase in fluids, coconut oil, or diet high in magnesium  Diet is a part of her bowel regime, but she also on 2 daily osmotic laxatives (these are laxatives that push water into the stool).  She is on a stimulant laxative (Senna) two weeks on and two weeks off and that helps with intestinal movement.  She cannot take the Senna Lax all the time because as a stimulant laxative, the bowel can become dependent on it.  For the past few months, we have increased our use of enemas.  I am not pleased.  Andrew and I refuse to get into a situation where it is 9-10 days without pooping and necessitating a hospitalization.  For that reason, if she doesn't go within 5 days or we see her stop eating/drinking,  she gets 3 enemas - one for 3 consecutive days.  The reason for this is because the first day nothing happens.  The saline just comes out 20 minutes later.  The second day may produce something or it may not.  Day 3 works! 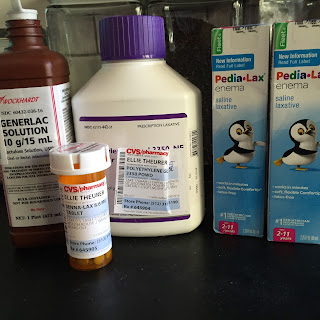 Why am I telling you all of this?  Well just before Christmas, we narrowly avoided a hospitalization.  Doesn't everyone want to spend Christmas week in the hospital?  After Ellie's surgery around Thanksgiving, we knew there would be trouble.  Narcotic pain meds actually cause constipation.  Ellie was on them for 4 days.  I had the unrealistic hope that her antibiotic would counteract the GI side effects or Lortab, but we were wrong.  Since then, we have not been able to get a handle on things.  The enemas were only producing small amounts of poop and she was bloated.  I finally put the call into GI.  They wanted to obtain an abdominal x-ray to determine her fecal load.  Okay, I think that is funny "fecal load".  Sorry, it is juvenile of me, but one has to have a bit of humor in times like these!

The x-ray was interesting. . .

Now, not that I am exactly an expert at reading X-rays or anything, but I can tell a foreign body when I see one. . . and tons of POOP!

As it turns out, the GI specialist didn't give a flying rat's patootie about the foreign body.  "Oh that will just be pooped out" only, my child doesn't poop!  That is the problem here.

Here was his big plan: an at home, 3 day cleanse.  If she didn't expel a substantial amount of stool by that Monday, she would be admitted to the hospital.  The cleanse was going to involve continuing the above medications while adding in 3 days of Milk of Magnesia, 3 days of fleets enemas, and a Magnesium Citrate.

Magnesium Citrate is nasty as all get out.  It is fizzy, but not like soda fizz.  Think more along the lines of pouring vinegar on baking soda fizz.  Only it tastes like liquid fizzy chalk with some flavoring - citrus, cherry, or grape.  Now they will go on about serving it very cold and adding in crystal lite or Mio drops and what not.  They are delusional.  I gag and vomit with just a few sips so imagine my developmentally delayed 6 year old having to drink 1/2 bottle.  Riiiigggghhhhttt. 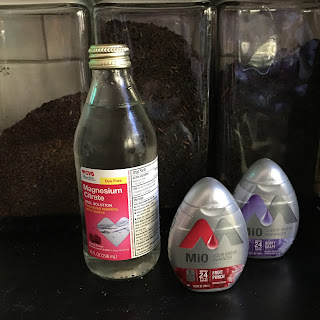 Needless today I busted out laughing on the phone and told them that it wasn't going to happen, but I would add in the MOM and do the enemas.

Well, I needed to eat my words. She did poop is out.  The next day.  It was one of those erasers that you put on top of a pencil.  My guess is she used her teeth to pull it off the pencil and swallowed it by accident.

That cleanse seemed to work because she wouldn't stop pooping.  . .  until she reverted back to her old ways.  We had to repeat an enema on New Years Eve (we totally know how to ring in the New Year) and start this new medication called Amitiza.  It seems to be working!  We are continuing with the Miralax and have cut the lactulose down to once a day.  She is eating a bit more than usual too. This is exciting!

*Update: 1/21/2016
I spoke too soon.  She hasn't gone in over 4 days.  I know 4 days doesn't sound like a huge deal, but this is kind of how things go.  She does great for 3-7 days and then suddenly nothing. Nada. Zip.  Her appetite isn't horrible, but it is less than it was last week.  We saw her GI doctor today.  Apparently, she may be one of those kids what will require weekly enemas for life.  I am not accepting this. 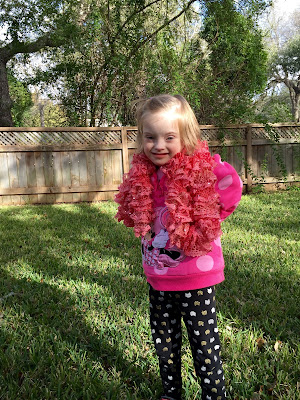 A few things from today's visit:
1. Ellie has gained 2 lbs!!!!  She has also gotten a bit taller which I knew about last month when some of her pants got too short.  TWO POUNDS!!!  She is slowly getting back to wear she was ~ 2 years ago.  Soon to be a Chunky Chicken again!
2. I convinced the doctor that Magnesium Citrate is nasty.  That he needs to go and try it himself so he can realize just how much he is asking of his patients.
3. The doc finally realizes that her constipation is out of control and that it is time to do more tests.  If she has something like Celiac's, her gut will be inflamed and damaged.
4. Next Friday, Ellie Bear is getting an upper endoscopy to rule out celiacs once an for all.  This is where they take a small noodle-like scope through the nose - esophagus- stomach- duodenum (upper portion of small intestine).  It allows the doc to look at all the mucosa to see if there are ulcers, reflux, inflammation, polyps, etc and to also take biopsies.
5.  If she has celiacs disease, she will be going gluten free.  If not, then she is going to see her other GI doc who specializes in motility disorders and will have a colonic manometry.  I'll spare you the details for now, but it is similar to the anorectal manonmetry she had 18 months ago to rule out Hirschsprung's Disease.

All in all, I am glad that we are finally trying to get to the bottom of the GI issues.  For so long, I have felt like the GI specialists were focused more on treating the constipation rather than trying to discover the reason behind it.  Hopefully, I won't take forever to give you all an update after next week's procedure.  I have been dealing with some health issues these past several months, which sadly means the blog has taken a back seat. I have a Christmas post that I still need to publish!