Upper Endoscopy - some answers and some questions

I wanted to give a quick little update as Bear had her upper endoscopy on Friday.  I hear you all snickering about the "quick" part because I am not exactly known for my brevity.

Upper GI or upper endoscopy or an esophagogastroduodenoscopy:  Whatever you want to call it involves inserting a lighted tube through the mouth, down the esophagus, and into the stomach and duodenum.  The duodenum is the upper 3rd of the small intestine.  This tube has camera that essentially allows the doc to see the insides of your upper gastrointestinal tract to look for reflux, ulcers, tumors, etc. and allows for biopsies. 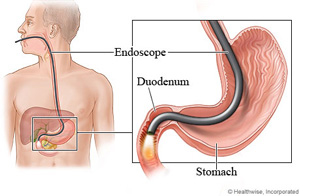 Bear actually had one back in August of 2011 because she was Little Miss Spits A Lot with her reflux projectile vomiting.  Funny thing, is that after she got the endoscopy, she stopped spitting up.  It was as though the test cured the reflux.  We couldn't completely 100% rule out celiac based off of this upper GI because she has barely started to consume gluten after testing out of an oat allergy (yes, a random oat anaphylactic allergy).  Oats are often grown next to wheat or manufactured in the same plants as wheat, which is why we pretty much stuck to rice.

There are two main differences between the endoscopy results from 2011 and this past Friday.  The one from 2011 showed a beautifully pink and normal upper GI tract.  The one from Friday did not.

Bear's esophagus was beautiful. No signs of reflux or anything exciting like that.  Her stomach, however, is quite angry.  Red.  Inflamed.  Basically, she has gastritis.  The GI doc did a rapid test for H pylori, which is a type of bacteria that causes ulcers.  It was negative.  He will send a sample to the lab to do a more conclusive test.  There is also the possibility that one or some of her medications are causing the gastritis.  Or it may be something else.  The upper part of her duodenum is also not very happy with marked pockets of inflammation aka duodenitis.  This could be from leaking stomach acid into the small intestine, an autoimmune disorder such as celiac disease, lactose intolerance, or some other inflammatory process. The lower portion of the duodenum appears normal.

Seven tissue biopsies were taken and have been sent to the lab.  It will be 1-2 weeks before we know the results.  Based off those results, we will have a clearer idea as to what is causing the inflammation, what other tests need to be run, and a treatment plan.  Interestingly, it may have nothing to do with her constipation issues, but probably has had a significant impact on her poor appetite and her poor weight gain even with the appetites stimulant..  It is a lot of wait and see.  In the meantime, we are going to start her on Protonix, a proton pump inhibitor similar to prilosec ,which well help decrease stomach acid production and allow her stomach to heal.

To say that I am stressed out is an understatement.  I really thought everything was going to come back normal. How long has this been going on?  Why didn't the GI doc agree do the scope earlier?  How could I not know that my daughter was/is in pain?!  Oh how I wish Ellie was able to communicate and tell me what hurts and bothers her!

Ellie Bear vs. the OR:
We were fortunate that Ellie was able to have her procedure at the outpatient day surgery center rather than in the hospital OR.  It was a much more pleasant experience for the most part.  Well, as pleasant as a surgical center can be. She did great in the waiting room, but then lost it when we got pulled back into pre-op.  She saw those hospital beds and knew what was coming.  This was  her 3rd time under anesthesia in the past 5 months so she remembered how cruddy she feels afterwards.  She calmed down with the help of her iPad, a fresh coloring book with color wonder markers, and a new book . . .  until the surgeon, charge nurse, and anesthesiologist showed up, which is when she displayed her super human Bearity Bear strength and shenanigans.  Ellie gave us a little trouble coming out of anesthesia.  Probably because she wanted some beauty sleep, but as soon as she was up, she was wild!  Girlfriend is a cranky pants, combative little toot post-surgery.  She screamed the entire way home and continued to be agitated even after she ate 3 chocolate frosted donuts.  A few hours later, she was back to her usual perky, spunky self.