If you are new here, you might want to read this blog post first so that it all makes sense.

Radiology wasn't doing such a great job at calling me back so I took it upon myself to call GI. Of course, I wasn't sure that GI could do anything since Ellie's case was no longer under their jurisdiction.  I didn't contact the nurse of Dr. S, the ordering physician, but rather called our primary GI's nurse, K.  Out of all the specialists we see, K from GI is the only one who ever calls back in a timely manner and she knows her stuff.  If anyone could light a fire under radiology's patoocus, it would be K.  Everyone needs a K in their corner.

K called me not even two hours after I left a message.  She spoke to radiology who informed her that they were doing a massive schedule rehaul.  Translation: moving around already scheduled patients so that all their surgery dates will be pushed back, which means they are booking ever farther out.  Anyway, my point is that radiology stated that she would call me the next day and she did.


Two Friday's ago, I spent 20 minutes on the phone with the Interventional Radiologist's [IR] nurse, C.  In the middle of HEB. Our local grocery store.  In the dairy department to be exact.  It should be noted that I forgot to pick up half the items on the list after speaking with her. Like the ingredients for what I planned to make for dinner that night.  We ended up eating out. Back to the topic at hand, C spent a great deal of time explaining to me how this is all going to go down.  I am not amused.


First, Ellie will come into the hospital on a Thursday for a contrast enema.  This is supposed to clear her out (yeah right) and allow them to see the exact location of her cecum, the upper part of the large intestine.  Now, I am not real clear on this, but her colon is supposed to be in a certain state for the procedure.  Fully cleaned out?  Partially empty with stool of a certain consistency? I don't know, but let's for full clean out because I know we can accomplish that.  I carefully explained that my child's colon is uncooperative and will probably need a 23 hour hospital stay involving GoLytely through an NG tube.  Apparently, I have to contact Dr. S in GI, our secondary GI doc, to "discuss".  It's like musical specialist phone calls over here.

From Friday - Sunday, Ellie can only have clear liquids.  No solids.  No food.  For 3 days!  How am I to explain to a child who is developmentally 3-4 year-old that she needs to starve for an upcoming procedure?!?!?  They are nuts!  Seriously, unrealistically nuts.  It is like child food torture.  Andrew and I have a big plan - remove all food from the house. Every. single. last. morsel.  All 3 of us will survive off juice and water and jello, but us parents will get take out after Ellie's in bed.  Seriously, whose brilliant idea was this?!  Why not do the clean out from Saturday - Sunday before surgery???


Monday, Ellie will be admitted to the hospital where she will have an abdominal X-ray to inspect the state of her colon.  If everything looks good, she will go over to IR and have her cecostomy with a temporary device (button/tube) placed.  Again, I am not sure if she needs to be fully cleaned out of not because nurse C said that if she is too liquidy, the surgery would be moved to Tuesday.  If on Tuesday she is still liquidity, the procedure will be canceled.  Let's all cross our fingers, pray, send positive vibes, and happy thoughts that this does not happen.  Repeat after me: "Ellie's colon needs to be in a awesome state" or mom will throw a huge conniption fit in the hallways of the children's hospital and will be escorted out by security for her ranting and raving.

After the procedure in IR, she will remain in the hospital for a week.  If she does well, she could be released on Wednesday or Thursday.  Take a wild guess as to what I am hoping for.  How will I keep this hyperactive child occupied for an entire week.  An entire week spent in one room.  I'll be climbing the walls with Ellie and start talking to myself.  Oh wait, I already talk to myself.

Now onto scheduling. Because the procedure is on a Monday, we need a Monday opening in the schedule. It also needs to be on a week where the doctor is around for the entire week.  This really limits when we will get scheduled.  As it stands, we are booked for December 5th.  Now for the kicker.  There was a surgical date available for 11/7.  Yes, the beginning of November.  I was thrilled until I learned that you need to have a consult before the surgery.  The earliest consult date was for 11/8.  The freaking day after the surgery.  ARE YOU KIDDING ME?!?!?  It would be nice if the radiologist would, oh I don't know, work her into the consulting schedule.  You know maybe do a 30 minute over book or something.  The nurse is going to talk to the radiologist, but she warned me that it is highly unlikely.  That was over a week ago.  I put a call in to touch base and as usual, I am still waiting. 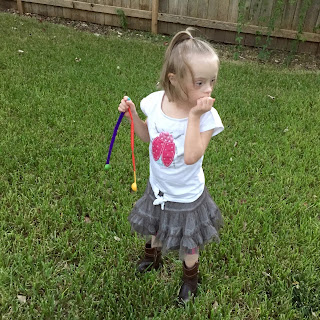 I am frustrated, but doing okay.  I am peeved that she will now have the procedure 6-7 months after she was first referred for a cecostomy.  I was angry on 9/12 when she was supposed to be in the OR.  Yet, I can't do much other than complain and moan about the unfairness of it.  I can't make a surgery date magically open up.  So now we wait and continue to poorly manage Ellie's constipation the way we have been these past several months.  She has been dealing with the constipation for nearly 3 years and yes, it has gotten progressively worse, but we can make it another couple of months.  I am paranoid and anxious that her colon will not be in the right "state" that Monday or Tuesday and it will be canceled - having to start all over again.  I am trying to get into a sense of calm.  To stop freaking out and thinking about the cecostomy nearly every waking moment.  I need to get a handle on it because I've got another 3-4 months to survive.

In the meantime, I am off to go constitute a special enema in my kitchen in hopes of "uncorking" Ellie's gut.