Summer has been underway since the last week of May.  Ellie had her Wish Connection Trip at the beginning of June (see blog post to learn more about her trip and The Wish Connection) and had a blast!  It was such a wonderful experience for her and the rest of the family.

She is back to doing swim lessons.  I wanted to sign her up for 2 sessions, but the Bear has been busy with camps.  Ellie's swim instructor is incredible.  She teaches kids with special needs in the pool in her back yard.  A few years ago, the instructor and Ellie accomplished more in 1 lesson compared to the 6 lessons we had with the YMCA! 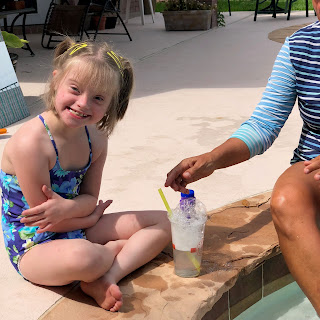 This year we signed Ellie up for horse camp in both June and and in July.  Her June camp went so well.  She had a blast and was on her best behavior. She managed to win the award for The Most Energetic Camper surprise, surprise.  However, since then, we increased her Strattera and noticed that she is less cooperative - not following directions as well and is more oppositional (the low dose helped so much with the shirt pulling, tantrums, and cooperation).  Her days are about 50/50 good/bad.  She has horse camp this week.  The first day she acted out the entire time with shirt pulling.  Tuesday, her behaviors were better, but she was crying for Daddy and fell asleep for 10 minutes. I thought that she may have been sick.  Yesterday was a great day.  On top of that, girlfriend is refusing to ride.  They put her on the horse and she screams and kicks.  She has been doing great the past 5 years so I am not sure what is going on.  She has a horse show tomorrow so we'll see if she is actually in it. Still, she is loving it and asks for the "horses and donkeys" daily. 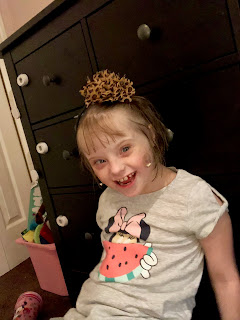 My daughter is a Metal Head.  Ellie keeps asking to dance and grabs my phone to select songs.  She has her favorites.  She has favorites to dance to and songs that she claps when they come on the radio.  She loves Like A Storm (a modern metal band from New Zealand that uses the didgeridoo in some of their songs), Skid Row, Guns N Roses "You Could Be Mine", Aerosmith, Queen (yes, I know, not metal), and to throw a bit of country in there - Cole Swindell's "Flatliner" and The Wiggles, of course.  Hey, a girl needs well rounded musical tastes.

About a year ago, we saw nephrology due to high blood pressure, but her BPs were only high some of the time.  She got referred back this winter by cardiology as she had tachycardia (high heart rate) and her BPs were more consistency high - especially the diastolic, but not enough for a diagnosis of hypertension.  We were supposed to have a follow up in August, but we had to move up her appointment because:

1. her systolic (upper #) was climbing into the mid-120s (her diastolic normalize)
2. the blood pressure in her left arm is significantly higher than her right arm - by 9-13 mmHg

Typically, the most common causes of high blood pressure in kids are related to kidney disease and congenital heart defects.  This is called secondary hypertension.  As the childhood obesity rates rises, us health care providers are seeing more and more incidences of primary hypertension (adult hypertension). 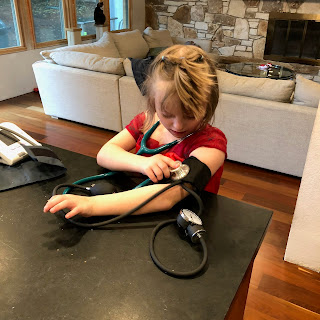 Normal blood pressures for kids are based off age, gender, and height %tile.  For Ellie, her systolic should be closer to 112 mmHg instead of 125 mmHg.

Having one arm measure consistently more than 10 mmHg higher than the other arm suggests cardiac defects such as coarctation of the aorta or an aberrant subclavian or carotid artery (an artery that branches abnormally off the aorta).  In adults, this is usually a sign of a clogged artery.  We are wondering how long this has been going on because at some of doc visits over the past 3 years, her BP was performed on the right arm and other times on the left.  I discovered it when I was checking her a few times a week at home.


Coarctation of the Aorta is a cardiac defect often discovered at birth.  It is a narrowing of the aortic (that big vessel you see at the top of the heart).  Symptoms include a murmur heard on the child's back, breathing problems, easily fatigued, and blood pressure differences between the arms and the legs.  In mild cases, the child may experience no symptoms.  The problem with coarctation is that the left ventricle of the heart has too work a lot harder.  This can cause the high blood pressure and thickening of the ventricular wall.

Ellie's nephrologist looked at the report of her January basic echo and it said normal aorta.  He contacted the cardiologist to see if we needed to do a doppler radar of the arteries or do anything.  Cardiology would like to repeat her echo.  Interestingly, typically, the abnormal artery is the right side, meaning the right blood pressure would be higher.  However, in Ellie's case, hers is the left arm.  That would be rare and I haven't been able to find any medical articles or case studies where patients had abnormal left artery. So, I am pretty sure her heart is fine and this is just another random health issue that The Bear has.

In the meantime, she has to take blood pressure medication as she officially has hypertension.  The nephrologist and Neuropsychologist  discussed and opted to start her on a morning dose of clonidine (she takes it at night for insomnia) as it helps with blood pressure and hyperactivity.  We start that this weekend - fingers crossed it helps her ADHD!

We are still dealing with Ellie's perioral dermatitis. Perioral dermatitis is a relatively uncommon dermatologic condition (~0.5-2% of the population) that occurs on the face - typically around the nose and mouth.  Women ages 25-35 are most commonly affected, especially those who wear makeup.  Steroids make it worse.  Unfortunately, Ellie takes an inhaled steroid for her asthma using a spacer and a mask.  Ellie started getting these round bumps around her chin and later her nose - all areas covered by her inhaler mask.  We tried treating is as though it was impetigo (a bacterial skin infection) with Bactroban (a prescription antibiotic ointment).  With no improvement, we switched to metronidazole (flagyl ointment), which is the primary treatment for perioral dermatitis.  Then we did hydrocortisone in case it was contact dermatitis.  I then decided to use lotramin (an anti fungal).  With the metronidazole, hydrocortisone, and lotramin, it would look like it was clearing up by day 3, but then get worse by days 5-6.  Eczema cream and her sunscreen make it worse. We tried switching her inhaled steroid from Flovent back to Qvar and that seems to have helped a bit. In May, she got referred to dermatology who is "working her in" on August 1st.  While it is not contagious and it doesn't bother her, it looks horrible.  I am thinking that perhaps she needs the rash scraped and maybe an oral antibiotic. 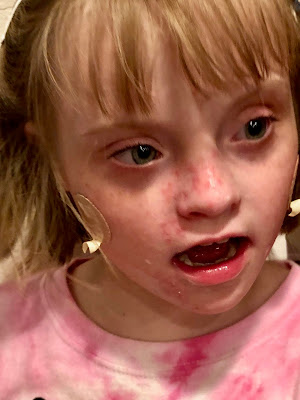