Just when I thought r*tard aka "the r-word" was the worst disability slur out there, I see Ricky Gervais' typed words "monglets", "mongs" and other forms of mongoloid on his twitter page.  These words were used to insinuate stupidity or being dumb.

The word mongoloid used to be a term to refer to people from Mongolia.  Over time, mongoloid was thrown about as a discriminatory word towards people with Down syndrome.  This is because people with Ds possess almond-shaped eyes or epicanthal folds, similar to those with Mongolian ethnicity.  The term mongoloid has been used in the past to mean dumb, idiotic, stupid.  There are so many synonyms for this word that it makes no sense whatsoever to ever use "mongoloid" or "r*tard".


mongoloid [ˈmɒŋgəˌlɔɪd] (not in technical use)

adj
(Medicine / Pathology) relating to or characterized by Down's syndrome
n
(Medicine / Pathology) a person affected by Down's syndrome
Why does this word bother me so?  Back in the day, as in before my time, the word "mongoloid" was used in the derogatory sense to refer to people with Down syndrome.  I thought that this word was predominately erased from our vocabulary.  Oh how wrong I was.  To see a celebrity, one that I used to think was hilarious, use various forms of this word hurts me.  Knowing that kids and teenagers pick up words from celebrities and use them in school, in home, out in general public, flinging them around as insults, hurts me.  It hurts my daughter who happens to have Down syndrome.  As if the r-word is not enough we now have the "m-word". 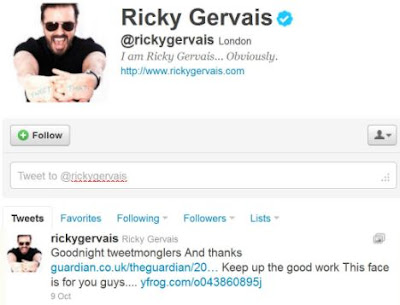 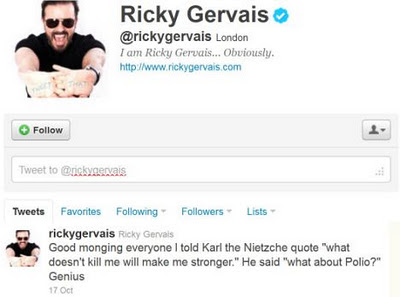 Ricky Gervais, you are ignorant and not funny.  You are insensitive and rude and you need to grow up. I would love for you to apologize, yet based off of your response to fellow tweeters, I can see that it is beyond you.  You have lost my support and I am urging others to boycott your television shows and movies. 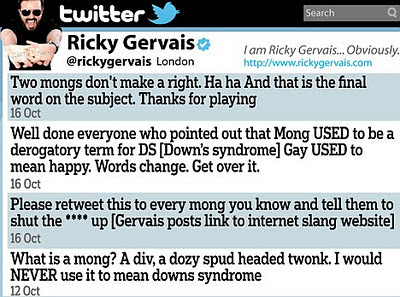 To learn more about Stop Disability Slurs, please visit http://www.facebook.com/stopdisabilityslurs or visit us at @SDSmovement
To contact Ricky Gervais and voice your displeasure: @rickygervais or http://www.rickygervais.com
at October 20, 2011

Email ThisBlogThis!Share to TwitterShare to FacebookShare to Pinterest
Labels: Down Syndrome, StopDisabilitySlurs