31 for 21: Subnormal, Mentally R*tarded-the Use of Demeaning Labels

Below is an article on the inappropriate use of derogatory labels in Malaysia.  The thing is, the United States is no better.  This is a global problem.  Read on! 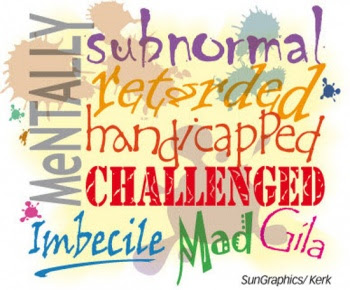 DEMEANING LABLES by Dr. Leon Chin in The Sun Daily
September 14, 2011
THE Malaysia I knew when I left for the United Kingdom in 1973 and the Malaysia now looked very different. Today, the impressive Petronas Twin Towers in Kuala Lumpur seem to symbolise the transformation of Malaysia into a modern country.
And with its 21st century urban landscape consisting of skyscrapers, modern architecture and vast infrastructure, Malaysia has surely come of age.
Certain things, however, have remained more or less the same. For instance, in my hometown Penang, the food dished out by the hawkers remain unbeatable, and old and tired-looking rickshaws still ply the roads. And many of the old town heritage houses in Georgetown are still standing.
But one thing seems trapped in a time warp. By chance, I happened to notice a signboard next to the entrance to a white building which read School for the Mentally Retarded Children.
I was rather bemused by it but, at the same time, saddened. Sad because even in this day and age, such derogatory labels are used to describe children with intellectual or learning disabilities.
Even sadder, it appears that this demeaning label is used not only by this school. I conducted an internet research and came to realise that similar awful labels such as ‘mentally handicapped’ and ‘mentally challenged’ are also used in other parts of the country by various schools and organisations working with children and adults with intellectual disabilities.
Labels like mentally retarded and mentally handicapped are by any stretch of imagination humiliating as these labels are frequently employed as terms of abuse and ridicule.
Labelling children and adults with intellectual disabilities with such terms only serves to reinforce society’s ignorance, prejudices and discrimination against them, and one such consequence is bullying or name-calling by other children.
These labels stigmatise them as social outcasts and therefore set them apart from their fellow citizens. Moreover, this social rejection may erode their self-belief, self-esteem and self-worth which can affect their psychological and emotional health resulting in behavioural problems.
Unlike product branding, putting labels on people is insidious and affects other vulnerable groups of people, such as people with mental health problems.
This is why mental illness labels such as ‘schizophrenia’ are often far worse than the illness itself because of the fear and prejudice it creates in the public mind.
More importantly, most members of the public are not able to tell the difference between ‘mental retardation’ and ‘mental illness’.
Consequently, because ‘mentally (retarded)’ is a rather conspicuous word, people may immediately – and wrongly I might add – assume that children with such a condition are ‘gila’ (mad).
In actual fact, it is a misnomer to associate people with intellectual disabilities with any form of mental illness.
Intellectual disability is neither a mental nor a physical illness. But, like any of us, they can be susceptible to both illnesses.
Learning disabilities are related to a person’s ‘intellectual’ (IQ) rather than a ‘mental’ (psychological) impairment due to brain injury at an early age or at birth.
Therefore, due to their intellectual and cognitive defects, many of them are unable to master simple household chores, self-help skills, social skills, inter-personal skills, communication skills or solve simple problems.
The majority of them are unable to live independently as a result of their intellectual disabilities and not because they are mentally ill.
Educational authorities have a duty not only to educate their pupils and students, but they also have a wider social responsibility in terms of challenging society’s prejudices and discriminations by means of social discourse and learning.
In this instance, how can the teachers and other professionals working with people with learning disabilities have any moral authority to stop members of the public from referring to their pupils or charge as mentally retarded or mentally handicapped if their respective schools or organisations use these same labels?
They are, in fact, sending out the wrong message.
At this point, I would like to add that I have since had conversations with some of the professionals and fundraisers supporting this group of people. They too would like to do away with these demeaning labels.
However, because mentally retarded and mentally handicapped are “official titles”, it would require the government to sanction changes to these titles.
It took the UK more than 50 years to change ‘imbecile’ to ‘idiot’; and ‘mentally subnormal’, ‘mentally retarded’, ‘mentally handicapped’ to finally ‘learning disability’.
But then, we are living in the 21st century and if Malaysia is progressive enough to transform into a modern state, she is equally capable of modernising her social attitude too.
Dr Chin Chiow Leon is a National Health Service (NHS) practitioner providing treatment for people with complex mental health needs and forensic behavioural problems. He’s also a member of the NHS Clinical Governance Committee and a visiting senior lecturer. Readers with queries can write to him at psychology@thesundaily.com.
Do you want to make a difference?  Are you angered by the use of discriminatory language in the media and general population?  Consider joining Stop Disability Slurs on Facebook.   To learn more or on how to become an advocate, visit our facebook page listed below or email stopdisabilityslurs@gmail.com

http://www.facebook.com/stopdisabilityslurs
Disclaimer: I am the co-founder.  Still, you really should join because united together under a common cause, we can make a difference and we already have! 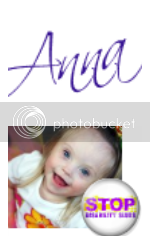 Email ThisBlogThis!Share to TwitterShare to FacebookShare to Pinterest
Labels: 31 for 21, StopDisabilitySlurs